Cost of Living in Australia: Where's Your Money Really Go?

Do you know exactly where your money goes every week?

If you did know, do you think you would change anything?

The Australian Bureau of Statistics Household expenditure survey 2009-10 projected that in 2012 Australians would spend $642 billion on general living costs.

Cost of living in Australia Ingographic

This cool infographic breaks down where Australians are spending their money. Here's some quick facts: 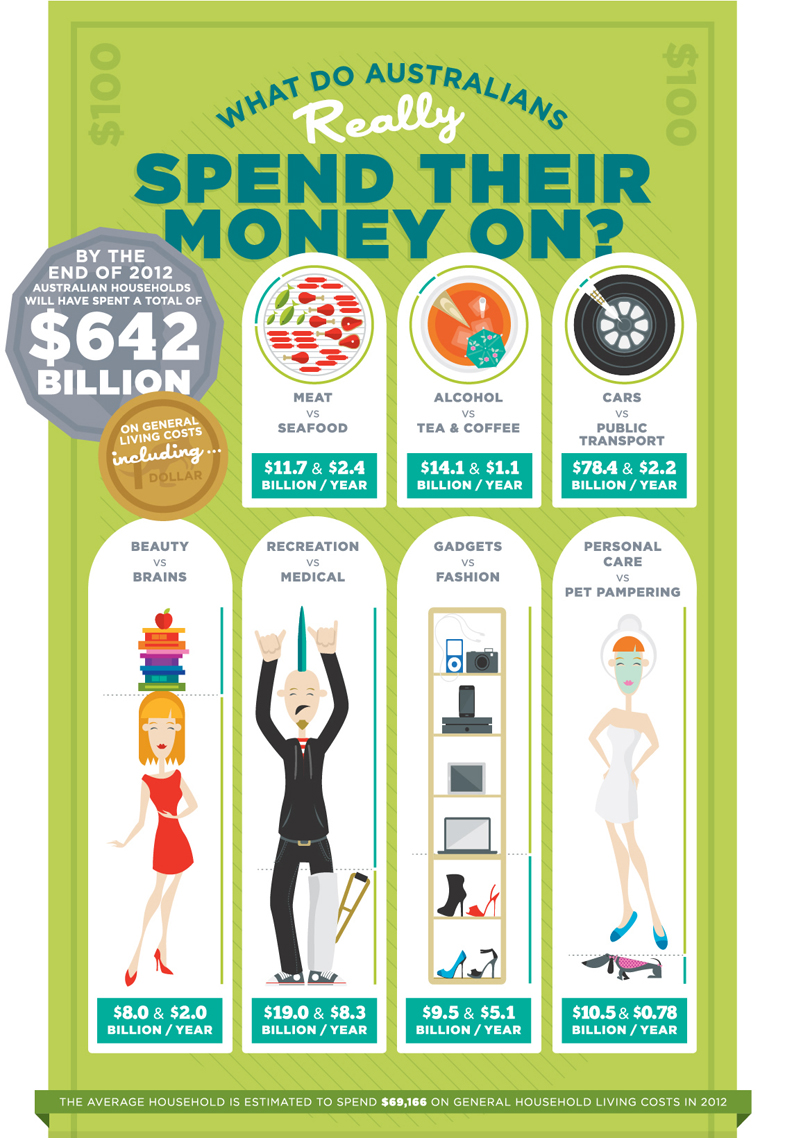 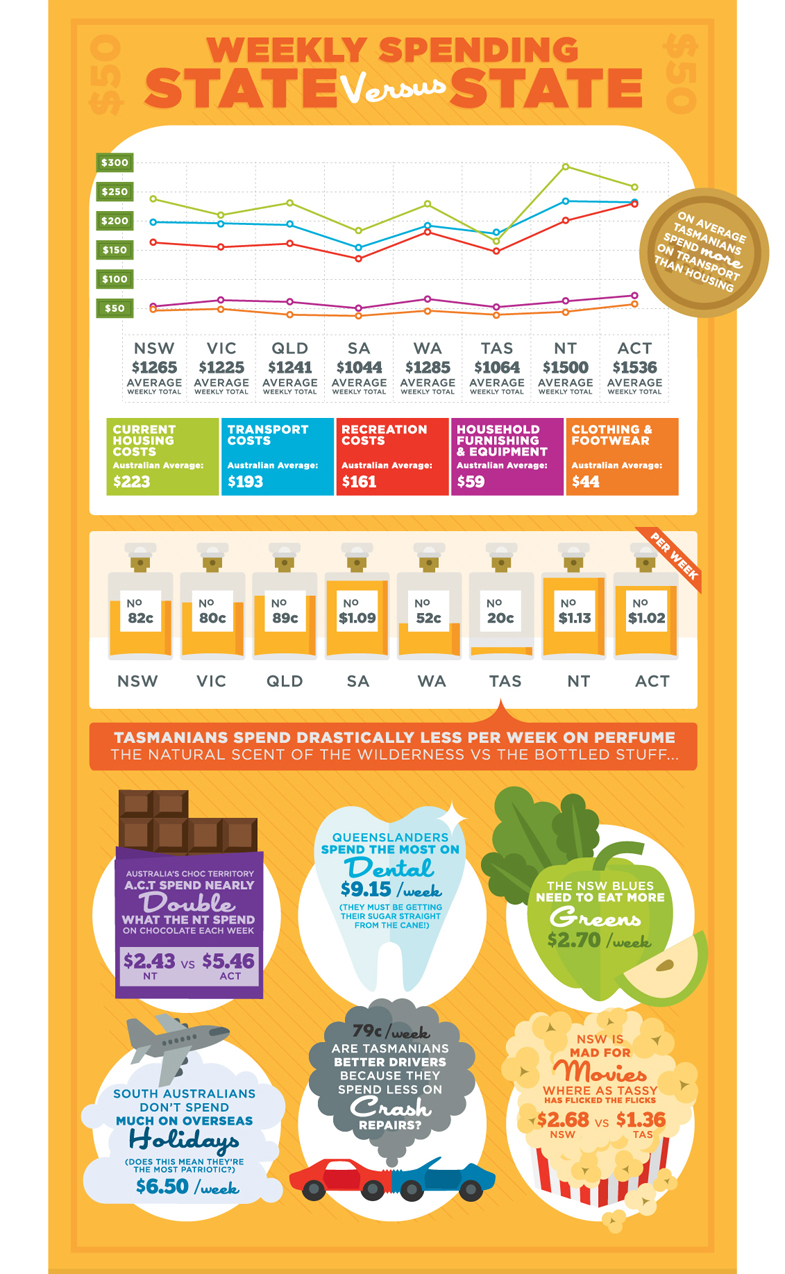 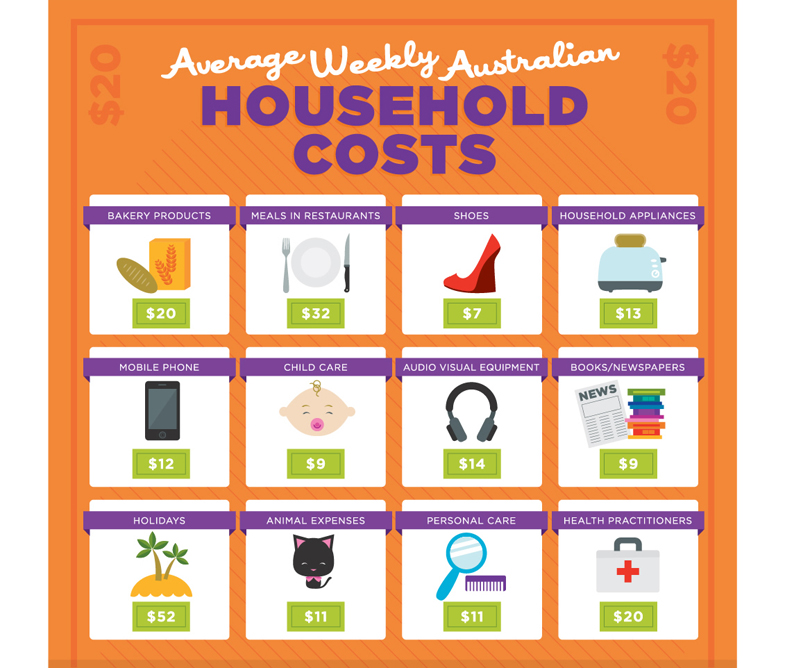 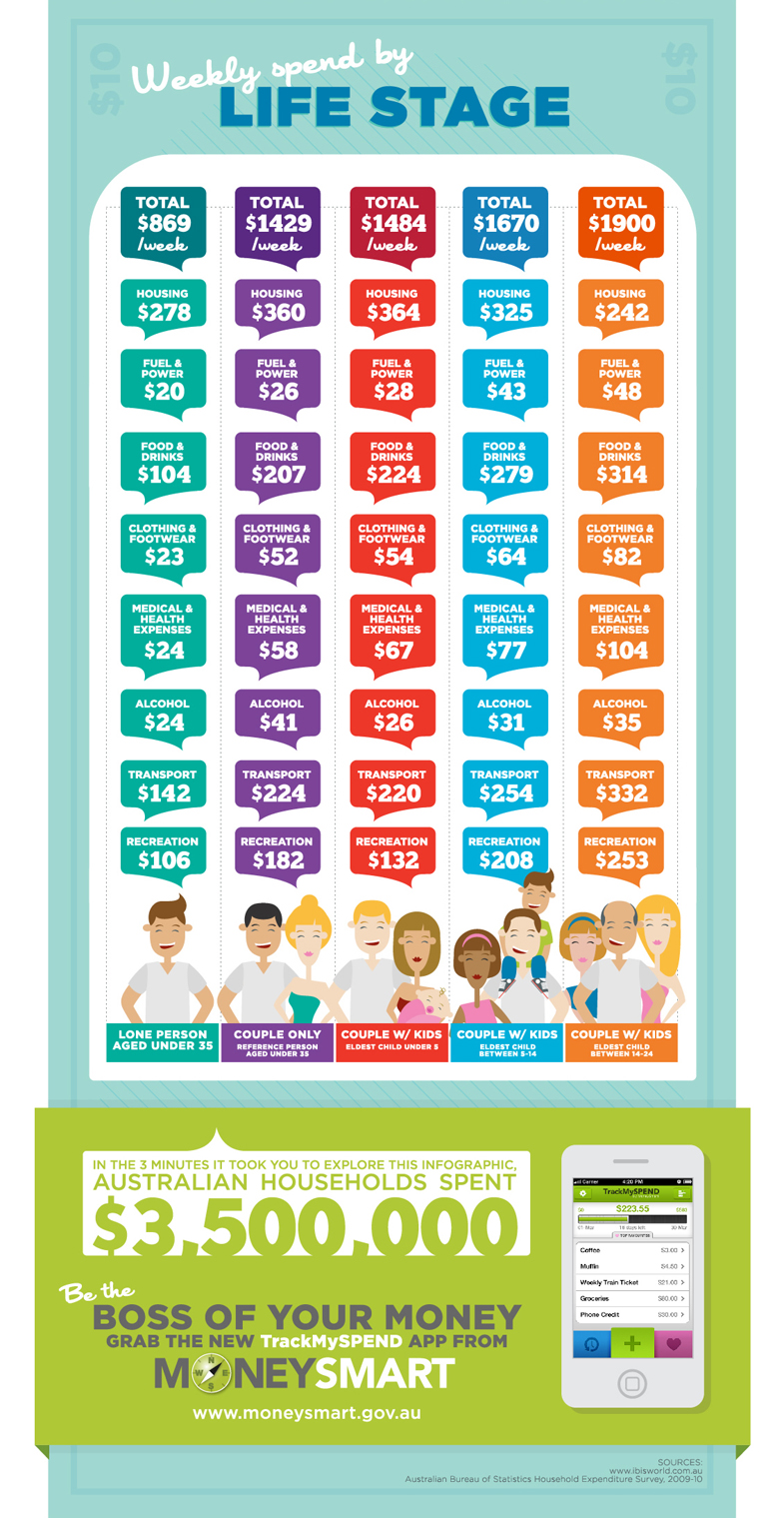 Here’s a breakdown of what Australian’s generally spend each week, based upon life stage. How does your spending compare?

Let’s have a look at how Australia compares with countries overseas.

In 2014 Deutsche Bank’s annual world CPI found Australia to be 12% more expensive than the US, with both Sydney and Melbourne in the top 10 most expensive cities to live in, with Sydney at 5th and Melbourne at 8th.

Purchasing a coke in Sydney will cost you 150% what it’ll cost you in New York. Taxi fares and public transport are also more expensive, however a gym membership is around half the price.

I’m going to assume right here that you’re not going to immediately move overseas to take advantage of cheaper pub meals. But every dollar that you save counts, so let’s have a look at some realistic options.

We do live in a consumer-driven economy, where we’re more likely to take the easy route. The instant gratification of buying a meal and having a beer poured with very little effort on your part is tempting.

However, stay with me and I’ll walk you through how by making some small changes, you’ll be able to save some money, and also increase the quality of your time spent with friends or family, without having to put up with a nosy bartender or poor service.

You decide to order burritos. An extra large or gourmet burrito might cost you $12 each, at the outside, and delivery is $7. This means that you’re paying $13.75 for a meal you don’t even have to make yourself, saving $4.25.

So by heading to a mate’s, in this case study you can save $19.25 in just one evening, and you don’t even have to cook dinner.

Let’s see what the difference will be if you decide to make burritos. Buying your ingredients at Coles, you’ll get everything for this recipe for Chicken Burritos, which claims to be better than takeout.

Shopping at Coles, you’ll get everything you need for $38.22. This costs you $9.55 each. You’re not saving much more by buying all the ingredients and cooking for yourselves, but you are getting the fun that comes with preparing your own food, even something really simple like this recipe. And it might even taste better than the takeout.

Cooking a basic meal for your mates will save you $8.45 each for the meal. You’ll find that you can reuse some of the ingredients so if you cook again you’ll save even more, because you’ll have some stuff in the pantry. Adding your beers to this, you’ve saved $23.45 for the evening compared to if you’d gone down to the pub. And you even get to choose your own music.

Maybe you don’t want to hang out at home every weekend, but if you opt to do this once a fortnight when you’d otherwise head out, you’ll save $609.70 over a year.

This may not seem like a lot of money over 12 months, but you should definitely pop over to our Extra Home Loan Repayments Calculator - this will give you an idea straight away how quickly you’ll can turn a small short term saving into a massive saving in the long term.

Imagine if you decided to save this amount of money every week, instead of every fortnight! This is definitely a good reason to have one night in and one night out over the weekend, instead of heading out 2 nights in a row.

You don’t necessarily have to put the money towards your home loan. You might use it for your annual car registration, comprehensive car insurance, flights - domestic or international (have you seen how cheap Bali flights are?) or for a camping trip. Anyway you look at it, you can improve your lifestyle by learning simple savings habits.

Tom Caesar is the Managing Director of The Positive Group, a group of Australian financial services companies offering a broad range of finance to clients Australia wide. The Positive Group assist clients in the areas of car finance, mortgages, insurance & wealth management. Tom has been in car & asset finance for over 10 years. Tom regularly contributes articles on car finance, insurance, technology and business growth, drawing on his experience of starting his own brokerage in 2009.